We arrived at the Alpine side of Palisades Tahoe just as the first chairs were being loaded following an overnight dump of 8 inches, with about a foot falling in the last 24 hours. Cold temps overnight ensured light & fluffy powder, as opposed to the heavier wet snow we’re so accustomed to here in the Sierra.

We booted up and hastily made our way to Summit Express, where we were glad to see there was absolutely no lift line. Our first chair up offered some insight to what the day held in store for us: We heard the occasional scraping of hardpack buried about a foot under the snow’s surface, but saw some significantly deeper turns being had in the trees and wind-protected zones. From the chair, we also noticed that we were pretty well beat to the punch of getting first tracks on Idiot’s Delight, which had been our original plan.

Instead, we decided to hike High Traverse to Upper Saddle for a better chance at some untouched snow. As it turns out, this was a very wise decision. The short hike brought us to an absolutely untouched low-pitch aspect, before bringing us to a steeper section full of newly-refreshed small cliff drops. I called first drop and scored some wildly fun slow powder turns, before kicking out a method as far as I could over the small cliff below. Coverage was fantastic here and the snow was some of the deepest we came across all day. We took our run back towards the front side of the mountain, headed to Scott Chair.

To our delight, Scott Chair also had no line, but the coverage below left a little to be desired, so we decided to make our way to Sherwood in hopes of deeper snow.

The trees under the Sherwood lift line were out of this world. Winds from the west seem to have deposited a little extra snow in the dense trees below South Face Access, and at that point in the morning, they were still mostly untracked. Despite a little bit of dust on crust on The South Face and Sherwood Face below, we lapped this a few times before heading back to the front side of the mountain. On our final lap up Sherwood, the skies opened up once again to some heavy snowfall that continued for much of the rest of the day.

With the snow piling up quickly, we decided it was finally time to take that shot at Idiot’s Delight. We loaded Summit Express once again and made the traverse across in quickly diminishing visibility. Once we dropped in, however, visibility improved to reveal that this morning’s tracks were indeed starting to fill in with more snow. We charged down the bowl and into Three Sisters for some great pow slashes and rock drops that were well worth the wait.

We took two more runs down Idiot’s before deciding to save some legs for tomorrow. As of mid-afternoon, snow is still falling and should continue well into the evening. We should see another couple of inches overnight, offering a nice little refresh for tomorrow. The storm will have moved out by morning, but cold temps will remain for a potential sleeper powder day. 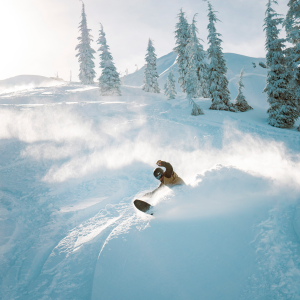